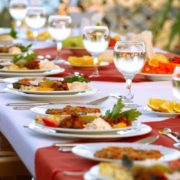 “You don’t get old at the table” says an old proverb, perhaps from no one in the world better embodied than by the Italians.

It is not wrong to say that an essential feature of the “Belpaese” culture is based on food.

The family stays together at the table in everyday life and on important occasions. Very often new loves begin during a dinner. At the table important speeches are made, projects are born.

The best ideas can be found in front of a plate of pasta. While sipping coffee, you can make deals. Biting together a sweet, chosen among countless variations in that “guantarella” that arrives at the end of the Sunday lunch, you can tame even the most rigid interlocutor and close a good deal.

And talking about “guantarella” … do you know why it’s so called? -> DID YOU KNOW THAT …? That’s why “a‘ guantarella e ’paste’ is so called 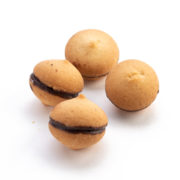 Imagine to come in the kitchen of the Royal Savoy family and finding a cook who is busy among the bowls, mixing a dough, intent on finding the right alchemy among the ingredients to satisfy the request of King Vittorio Emanuele II to invent a new dessert, with a different taste and shape from those already known.

According to legend, the “baci di dama” (“lady’s kisses”) was born this way, in the autumn of 1852, and the king liked them so much that they were soon served on the royal tables of the rest of Italy and Europe.

The real history – which is always less fabulous than the legend – identifies the true birth of “baci di dama” in a pastry shop in Tortona, a little village in the province of Alessandria.

The reason of such a particular name lies in the shape and composition of the sweet: according to a first version, the kiss would be that which the two small and “bellied” biscuits romantically share to remain united, held together by a greedy layer of chocolate.

A second interpretation, on the other hand, is that the name derives from the fact that the shape of the dessert suggests that of the lips of a tender girl intent in a kiss.

Originally the recipe involved the use of hazelnuts; the cavalier Stefano Vercesi modify the original recipe with almonds. The “baci di dama” were thus presented at the Milan International Exhibition in 1906 and were so appreciated that they won the gold medal, the highest recognition of patisserie of the time.

The recipe for “baci di dama” as we know it today was patented in 1919 by pastry chef Pasquale Balzola and his son Rinaldo (personal pastry chef of the king of Italy Vittorio Emanuele III from 1932 to 1938).

The “baci di dama” are biscuits included by the Ministry of Agricultural, Food and Forestry Policies in the PAT (Typical Agri-food Products) category.

To give those who taste them, as always, a sweet moment of delight.